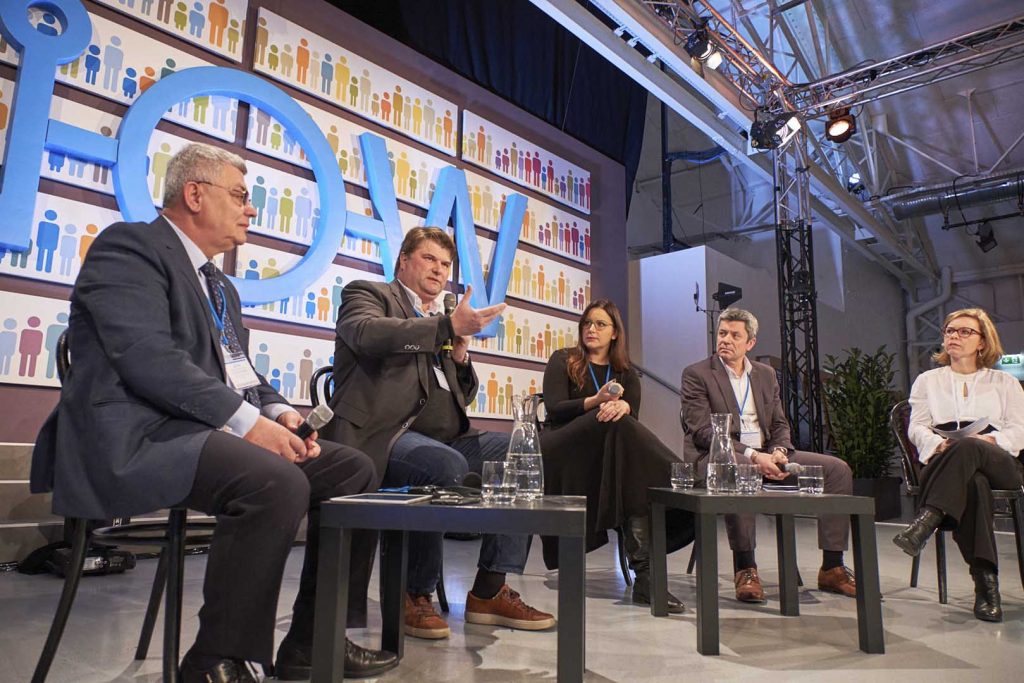 Polls have shown that the majority of people in European countries and in the USA believe that polarisation is decisively shaping our societies (Gentzkow, 2016; Gagné, NOW 7). This leads people to assume that there are more factors that divide than unite us. Are our achievements like peace, democracy, the minimum standards of morality, the freedom of speech and information, equality, and so on in danger? Jérémie Gagné is a political scientist and researcher for More in Common, a platform which conducts research and develops initiatives to overcome “division and strengthen people’s sense of belonging and identity”. He states that the polarisation we see today has a lot to do “with our mutual misperceptions that remain unchallenged for too long, our mutual judgements that are being made too quickly, with a dialogue that ends too soon.” Gagné and his research team have observed that we cannot simply use categories like urban vs. rural, or young vs. old etc. to explain polarisation. If we take a closer look at people’s opinions, most views are rather mixed or even contradictory, but randomly extreme left or extreme right. So why do we often picture two strong camps of equal size in combat with each other? Is it us vs. them, cosmopolitans vs. nationalists, black vs. white? As Gagné says, the fact that we tend to “view people who don’t share our values as bad, ill-intentioned and deficient” is typical human psychology. In fact, people hold very different views and none of them constitute a majority. It is therefore necessary to find out more about people’s beliefs or fears (Gagné, NOW 7).

“Nobody likes division … we crave a sense of togetherness.”

In 2017, the German think tank Das Progressive Zentrum and its French partner Explain – Liegey Muller Pons interviewed people who voted for right-wing populist parties in Germany and France. Islamophobic, xenophobic or Eurosceptic feelings did not prevail in their personal descriptions of the political contexts. They rather felt abandoned because politicians set the wrong priorities and neglect essential local measures designed to tackle challenges people face in their everyday lives. “When people see that their local area is being structurally weakened, whether this occurs through the removal of a post box or the closure of bus lines, they tend to feel devalued” (Hillje, 2018, 22).

There is no doubt that political decisions which at first sight seem to favour certain groups in society and ignore the needs of others, cause feelings of political abandonment where offering support and paying attention are clearly needed. As a result, citizens are increasingly venting their general frustration and disappointment upon political decision makers, and recently more and more on local politicians like mayors. The results of a recent poll in Germany on attacks on mayors showed that already 65% of mayors report to have been victims of verbal and/or physical threats and attacks in 2020 (Kommunal, 2020, 03 10). The same poll from 2019 revealed that 41 % believe attacks are increasing and that political engagement is less valued. At the NOW Conference, four mayors – Isabella Conti (San Lazzaro di Savena, Italy), Igor Marentic (Postojna, Slovenia), Mohamed Saadieh (Dannieh Union of Municipalities, Lebanon) and Tjark Bartels (formerly of the Hameln-Pyrmont district authority, Germany) – shared their experiences with the audience, describing the pressure they are under and the different forms of attacks they have encountered. San Lazzaro mayor Conti had to justify her support for refugees to residents who shouted at her: “Why do you help them when we need help too?” Conti understood that she had to counter the hate speech and verbal attacks on her by seeking dialogue and personal engagement with her opponents. She is convinced that we have to invest in those who show their discontent. Otherwise, they will feel even more alienated and will endanger the social cohesion in the community (NOW 7, Mayor’s Talk).

What represents an appropriate reaction to hate speech and attacks, which are often carried out by right-wing populists (Die Zeit, 2019, 12 23), of course depends on the individual case. A face-to-face encounter with the attackers is not always possible; sometimes legal steps have to be taken. What local decision makers need is more solidarity from their communities, as well as political and legal support from their governments. It is the mayors’ task to promote the well-being of their communities, while the community has a duty to respect their political commitment and support mayors like Marentic who says “Anyway, I will run again [for the next elections], because I feel I can do something.”