VISITING INSTITUTIONS AND PROJECTS ON CHIOS

FACILITATED BY ACT.NOW AND THE MAYOR OF CHIOS, MR. MANOLIS VOURNOUS 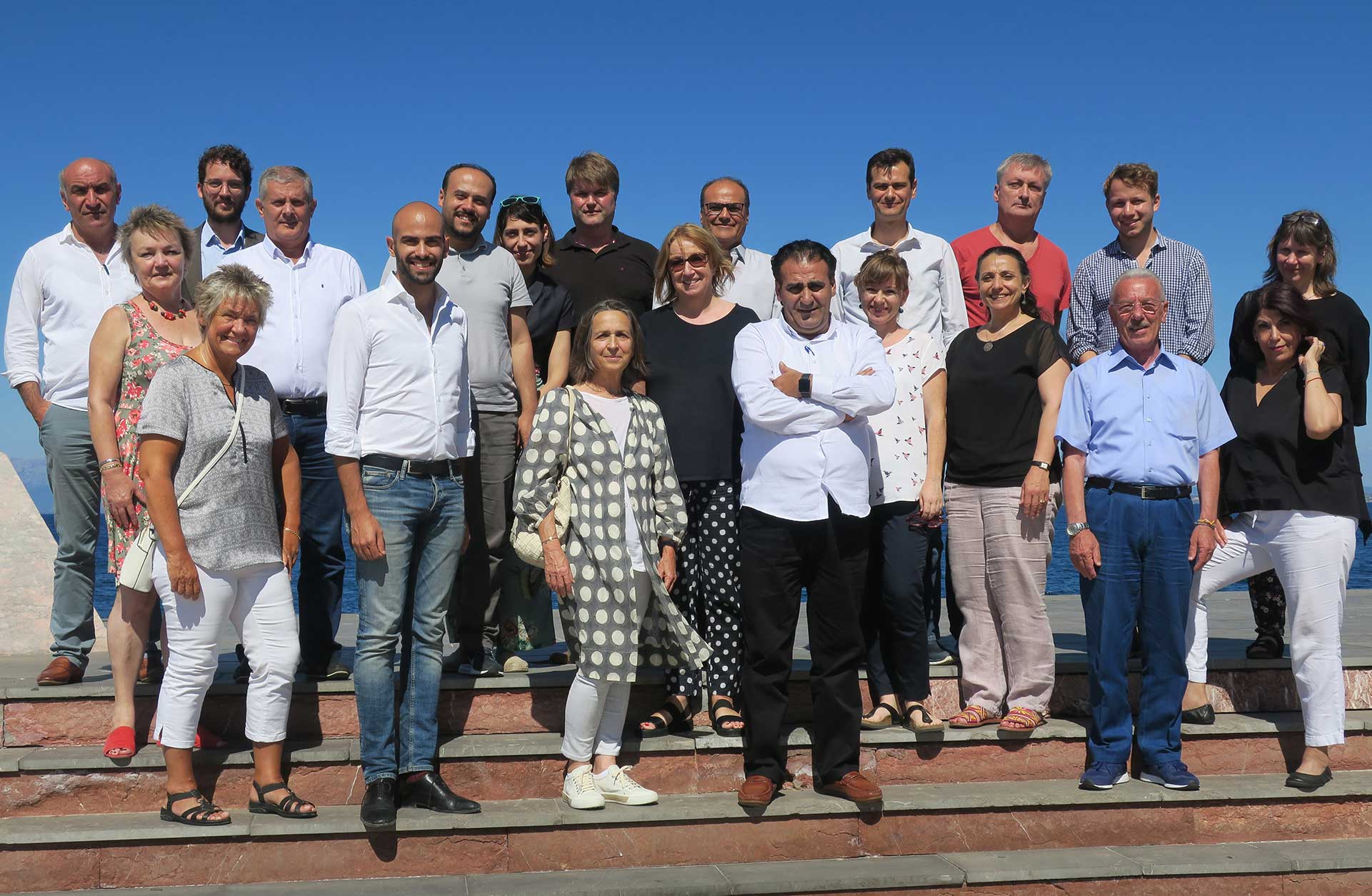 From 29 June to 1 July, the participants of the NOW Mayors’ Network from Germany, Austria, Italy, Sweden, Slovenia, Greece, Turkey, Lebanon and Jordan met on the Greek island of Chios on invitation of Mayor Mr Manolis Vournous. Chios is located in the East Aegean, has a population of 51.000 and is hosting approximately 2.100 refugees from Syria, Afghanistan, Iraq and other countries of origin. The economy of the island is mainly based on shipping companies which export local products such as mastic, olives, figs, etc. The scope of the field exposure on Chios was to present municipal institutions and projects supporting people in need of counselling services and tangible support. Furthermore, the group visited the refugee camp VIAL managed by the Greek government and a project addressing unaccompanied minors, led by the non-governmental organisation METAdrasi.

As one of the 250 Community Centres in Greece, the Community Centre in Chios opened in July 2017 under the administration of the Welfare Department of the Municipality of Chios. It provides a broad range of support services to all citizens and the Roma community. These services aim at combating poverty, social exclusion and any form of discrimination, as well as promoting employment. Community Centres are social structures designed and organised by the Ministry of Labour, Social Insurance and Social Solidarity. They are being funded by national funds and the European Social Fund. The staff consists of two social workers, one psychologist, one job counsellor, one mediator for Roma and vulnerable groups, one counsellor for educational matters and one health supervisor. The team jointly works on the cases of the beneficiaries in order to find the best solutions for each individual case.

The Social Market in Chios is managed by the municipality and has been operating for 5 years. It distributes food, clothes, toys and hygiene products to around 400 families in need on a monthly basis. The beneficiaries are selected by the municipality based on specific guidelines. The project is funded by the EU, the municipality and donations by companies and private persons. As part of the market’s team, the social worker provides psycho-social support alongside the product distribution to the beneficiaries. There are several other private initiatives and organisations distributing used items and goods. The municipality, furthermore, finances meals for poor people, which are being handed out at local churches and other facilities. 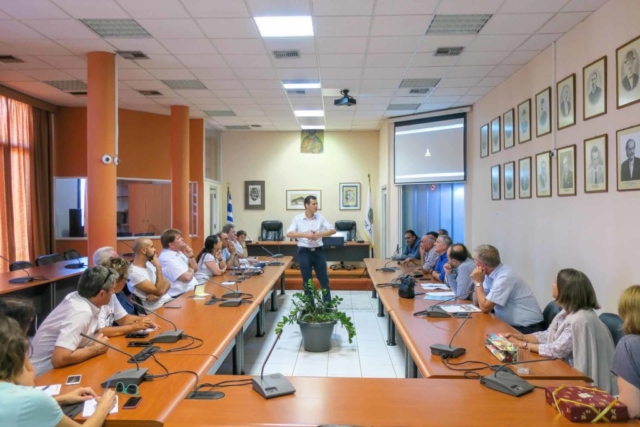 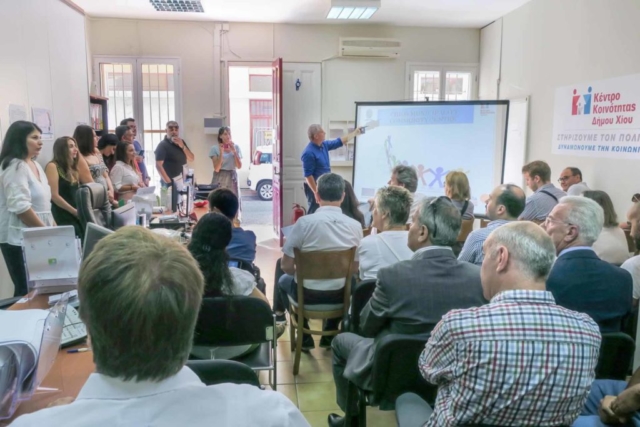 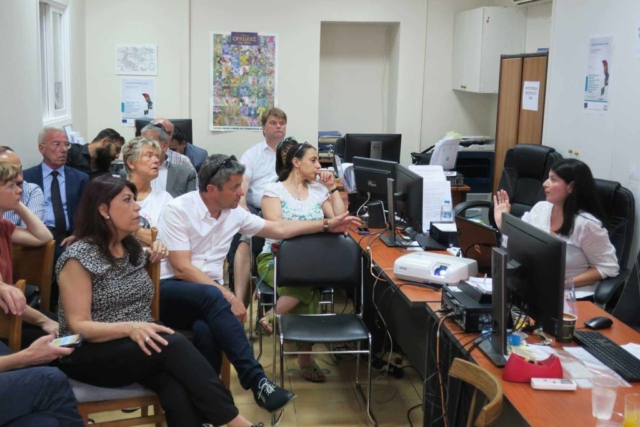 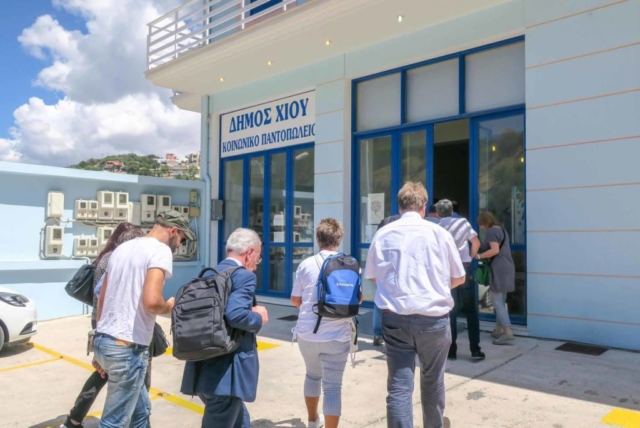 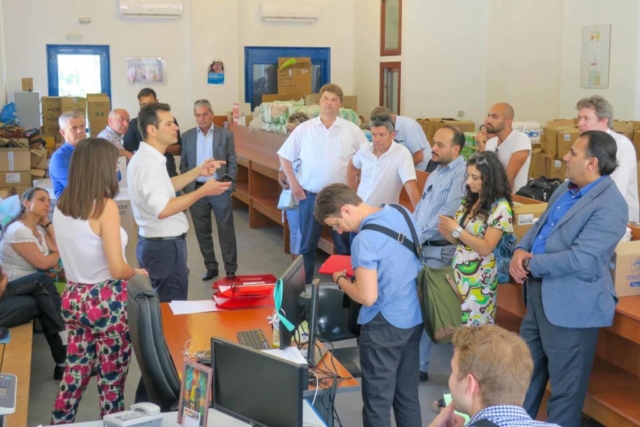 The “Reception and Identification Centre of Chios” (RIC), also called VIAL, is one of the country’s five hotspots and is responsible of the first reception, registration and accommodation of newly arrived refugees (mainly from Syria, Iraq, Afghanistan). On the day the group visited the camp, 88 people had just arrived at VIAL, waiting for the procedure of first reception and identification (personal control, screening by Frontex, age control, finger prints, Greek police registration, application for asylum, etc.), which can last between 3 to 25 days. Asylum applications are answered within an average duration of 6 months. The residents of the camp were allocated either to one of 91 containers or to the tented area, which had been established as the capacities of the camp for around 1274 people had been exceeded; at the moment, 1610 people are accommodated in the camp. The camp administration is currently facing many challenges due to lack of space, infrastructure as well as due to lack of political decisions by the Greek government or the EU. Since April 2018, there have been no departures to the Greek mainland of people whose registration processes have been completed. Furthermore, more doctors and interpreters are needed as well as spaces for children and young people for age-appropriate activities. The expansion of the camp is being blocked due to a supreme court decision and the protests of the local population.

The organisation METAdrasi has developed a complete safety net for the protection of Unaccompanied and Separated Children (UACS) involving the Guardianship Network and the Transit Accommodation Facility, the first and only transit accommodation facility for UASC in Chios. The facility provides for professional personalised care such as psychosocial support services, counselling, access to medical care and interpretation services. Each of the 18 children (13 boys, 5 girls) who are currently hosted at the shelter are assigned a guardian and a lawyer. Whereas most of the children attend the public schools in Chios, additional educational and afternoon recreational activities are being offered by METAdrasi. The team of the shelter guarantees stability for the minors while they have to go through long legal processes to gain asylum in other European countries leading to a final reunification with their families.

Since VIAL is currently accommodating 52 unaccompanied minors and separated children and the shelter of METAdrasi in Chios has already reached its maximum capacities, we have to accept the fact that the living conditions of minors in VIAL lack a child-friendly surrounding and cannot fulfil the needs of the minors appropriately.